After six years of living in Florida I have come to realization that I will not be producing huge yields of yellow squash and green zucchini. If I am going to be successful in squash production, I will have to think subtropical. A couple of years ago, I visited a friend in Plant City who, on his three-acre homestead, grows rare fruits and vegetables from around the world. He gave me a pot with a small squash-looking vine sticking out of it. He explained to me that you cannot grow these squash from seeds, because viable seeds are only found inside the fruit.  So, he said, inside the pot was a buried squash which had sprouted.

When I returned home, I dug a large hole on the North side of my vegetable beds and planted the 10 inch chayote squash vine. By the end of the year the vine had split into two thirty-long vines which produced nearly 30, 1-2-pound, squash!

Last February in Tampa we experienced five freezes. The vine died back to the ground. One year ago, during the spring, the vine came back threefold. In December 2018 I harvested 60 squash and in January picked another 40.

One of my favorite aspects of this vegetable is that aside from watering it in for the first month, I did not supplement with water for the following two years. I would not say it is drought tolerant, but our summer rains provide ample water for this hardy vegetable.

Chayote squash, Sechium edule, is a member of the gourd family. It originates from Mexico and as you can tell does extremely well in Florida. The English name chayote comes from the Nahuatl word chayohtli. It can be grown trailing on the ground or up trees, trellises and arbors.

To plant your own chayote squash simply go to a grocery store and purchase a fruit. The large supermarkets usually have 10 or so in a small basket in the grocery aisle. They are palm size and light green and slightly bumpy. If you can’t find them there, try a Hispanic or Asian supermarket. If you can find a fruit that has a small vine sticking out of it, you are good to go. If they have not yet sprouted, buy a few and place in a dark cool location. The seed will sprout and soon you will have a six-inch-long vine. Then plant the squash underground and wait for the harvest to begin. 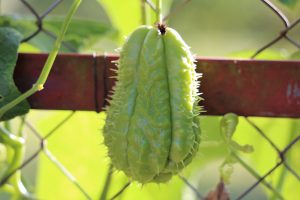 The cultivar I grow is about three times larger than the typical grocery store variety. My variety is also white to yellow, compared to the common green. Other cultivars include elongated ones and some even have soft spines.

If harvested when young, the fruits do not need to be peeled. I have found that I must peel the majority of mine, as I seem to leave them in the sun too long, which makes the skin very tough. When peeling the fruits, I like to wear gloves as the uncooked fruits produce a white substance that is sticky. You can boil the entire fruit first, prior to peeling, to make the irritating substance disappear.

Chayote today are cultivated and eaten worldwide. They can be found boiled, stuffed, mashed, baked, fried and pickled. They can also be eaten raw in salads. The simplest way to cook them is to cut them lengthwise with the skin on. Bake at 425 for 20 minutes with olive oil, salt and pepper. 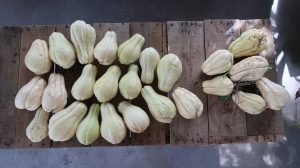 In Creole cuisine, chayote are eaten seasonal around Thanksgiving and Christmas. This is perfect timing as the vines grow during the Florida summer and don’t start producing until late fall, early winter. In Thailand, and much of Asia, the squash’s tip shoots and vegetable, are added to stir-fries.

Another name for chayote is vegetable pear, due to their shape. In Australia they have an urban legend that claims McDonald’s apple pies are made from chayotes! This is probably due to canned chayote being sold as canned pears, during food shortages that followed WWII. McDonalds become so upset by the folklore that they had to came out with ads that said their apple pies were made explicitly with apples.

But this makes me think how versatile chayote are! You can eat them savory or sweet. You can eat their fruit, seed, vine and tuberous root.  Since my goal is to reduce my footprint and grow as much as I can, I have froze much of my harvest. I blanch the fruit for a few minutes and then place in meal-sized Tupperware containers which go into the freezer. I have also sliced them in spears and pickled them. Eating fresh of course is preferable, but if you are going to grow chayote, be forewarned, you will be so successful you’ll need a plan!