And a tenrec would be…

Earlier I alluded to the fact that I wrote a children’s book titled “A Tenrec Named Trey: And other odd lettered animals that like to play” but forgot to mention one very important thing. It left readers asking: “What is a tenrec? 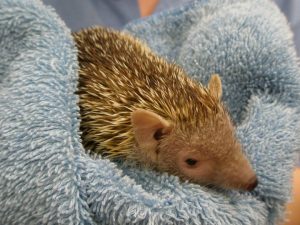 Well it is an animal that is for sure. A very unique animal from the mysterious island off of Africa, famously cartooned by DreamWorks called Madagascar. Some resemble small shrews while others look like miniature or giant hedgehogs. Some have modified hairs, like hedgehogs, which is why many people either pass them off as hedgehogs or as hedgehog relatives. Their faces are cuter/uglier then hedgehogs with tiny beady eyes and a long snout.

Tenrecs are actually more closely related to elephants, manatees and aardvarks then they are to hedgehogs. Many hedgehog enthusiasts keep two of the 34 species as pets. To make it confusing though the tenrecs that are kept as pets have been named the lesser or greater hedgehog tenrecs, using the word hedgehog to describe their spiny hairs.

To learn more about caring for tenrecs I asked a WNY native who has raised and bred tenrecs for longer than a decade.

Pat Storm, who was born in Buffalo and then moved to Town of Tonawanda, Sanborn, Lockport, East Amherst, Newfane, Pendleton, Wheatfield and finally North Tonawanda. I feel like most of the readers were Pat’s neighbors at one time or another.

While living in North Tonawanda she received her first hedgehog. After a few years Pat purchased three greater hedgehog tenrecs and then lesser hedgehog tenrecs. She currently is the secretary of the International Hedgehog Association.

“I was at a hedgehog show when someone brought in some greater hedgehog tenrecs.  I was immediately attracted to them,” Storm recounts.  “They are very like hedgehogs, yet very different.  I decided that I would research them and someday get myself one as a pet or maybe a trio to breed.”

Storm believes that most people are not the best caregiver candidates for these unique.  In the wild tenrecs naturally stop eating and constantly sleep during a period of time called torpor.  It is like hibernation, but not as deep of a sleep, from which they may or may not get up to drink or eat.

Storm says she still gets “uptight” when her animals go into torpor, which is understandable considering it is a pretty strange feeling for most companion caregivers to notice their animals, not eating, not losing weight, not defecating and sleeping constantly. However, caring for tenrecs, involves riding out the state of torpor,  a natural process. In the wild it would allow tenrecs to survive the season of intense heat and lack of food.

They are also nocturnal animals and can have a nasty bite, Storm says. Saying that she has had some that have never bitten anyone and others that have become notorious biters. I have worked with three lesser hedgehog tenrecs and all of them been very kind.

The species of tenrecs that people keep as pets, eat many different types of insects. Some commercial foods are available – labeled insectivore diet – but they will also take a few snacks.

“They will eat young hissing cockroaches and Egyptian cockroaches.  I also give them apples, bananas and some jarred baby foods,” Storm says.

To make tenrecs happy, Storm says they need a large cage, something to climb on, a wheel, a place to hide and plenty of fresh food and water.  Some appear to even enjoy being snuggled.

“These little creatures have been so very interesting to watch and compare with what little is written about them,” Storm explains.

She adds, “Belonging to groups where we compare notes about our tenrecs, we learn from each other and are finding that much of the old materials about tenrecs is very outdated and no longer true.”