Every year I teach my students about native, nonnative and invasive species. They are always surprised to learn that the ubiquitous citrus is a nonnative from Australasia, being domesticated in Asia a few thousand years ago.

Last June when I visited Thailand, I traded one sizzling and steamy climate for another. When I stepped off the plane it was like I helicoptered over Tampa for 20 some hours and landed in the same environment. However, I was greeted by pleasantly different smells, people and food. Walking around the Wats (Buddhist temples), public parks and botanical gardens I saw many similar edible and ornamental plants.

“Florida has a subtropical climate which much of Asia also has,” Dylan Terry, founder of Ready-to-Grow Gardens, a Miami based company explains. “Similar temperatures and rainfall allows some of the same crops to grow here.”

“I have been experimenting with heat tolerant annual veggie varieties from around the world for 10 years now,” David Whitwam, Owner of Whitwam Organics in Tampa says. “The challenge has been finding short season annuals needed for our relativity short ‘tropical weather season’.”

Both gardeners have gravitated toward Asian varieties in particular because of the vast influence various Asiatic cultures have had on our cuisine, their heat tolerance and palatability. Who doesn’t love a good home-grown stir-fry? Whitwam says that most of these like the long days of summer and, “can handle the heat, humidity, and a higher soil germination temperature.”

Butterfly pea / blue pea (Clitoria ternatea) – Perennial vine that produces 2-3 in. pods that are edible when tender. The real magic lies in the flowers which can come as single or doubled. Flowers are used in Malay cooking to dye rice. In Thailand the dried flowers are made into a sweet tea. By adding a few drops of citrus the blue tea turns pink-purple. In Thai and Burmese cuisine the flowers are dipped in batter and fried. 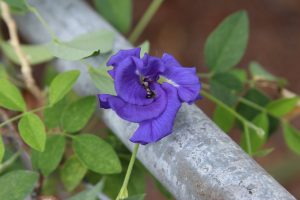 Chinese cabbage (Brassica rapa, subspecies pekinensis or chinensis) – “Great for making kimchi,” Terry says. “Some varieties require a lot of room but generally are easy to grow in the cooler parts of the year.” Members of the Pekinensis group have tightly wrapped compact heads such as Napa cabbage, while Chinensis resemble mustard or celery and are more common Southern China and Southeast Asia.

Daikon radish (Raphanus sativus var. longipinnatus) – This mild flavored radish contains 124% of your daily Vitamin C. Do best in cool weather with roots growing over a foot long and 2-3 in. wide. For compacted soil seed five daikons in a square foot. The proximity of the leaves will suppress weed growth. Can be planted as a trap crop or cover crop. Taste great with cucumber in a sandwich.

Ginger (Zingiber officinale) – “Can grow in sun or shade in soil high in organic matter,” Terry says.  The do best in well-draining soil. He adds that, “Generally in Florida ginger is planted from pieces of the rhizomes in the summer and harvested in the winter.” For maximum yield, this plant requires multiple months of hot and humid conditions – which is what we have! Turmeric (Curcuma sp.) – grows similar to ginger and also does well in Florida. 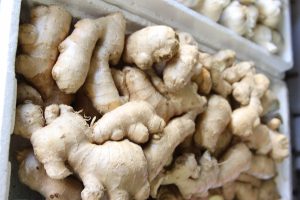 Katuk (Sauropus androgynus) – Grows as a bush or small tree with edible leaves that can be used raw or cooked. At my house I started a few variegated plants from cuttings two years ago. They slowly set roots and now are vigorous and self-seeding. Their flavor is very pleasant with a mix of pea and nut flavor. Do best with annual pruning.

Lemon grass (Cymbopogon citratus) – Terry says lemon grass is, “Very easy to grow, but requires ample room since it can grow 4-5’ across.” Lemongrass does best in well-drained, moist, rich soil with high organic content. Harvest anytime the stalks are 1/2 in. thick. Productivity can improve by dividing older plants.

Long Beans (Vigna unguiculata subsp. Sesquipedalis) – Chinese long beans, yardlong beans or asparagus beans seem to me like the quintessential Asian crop. They were one of the first seeds I acquired when I moved to Florida. They grow in the hot summer when it is difficult to grow other green beans. The pods, which begin to form after 60 days, hang in groups of two or more. They are a variety of cowpea and are easy to grow. Tender pods can be eaten raw or cooked.

Okinawa spinach (Gynura crepioides) – Attractive spreading bush with leaves that are green on top and purple on the bottom. Easy to grow from cuttings, leaves can be eaten raw or cooked. A non-true spinach, this leafy vegetable is grown commercially in China and is claimed to lower cholesterol.

Ping Tung Long Eggplant (Solanum melongena) – This Taiwan variety is sweet, tender, delicious and has proven itself to Whitwam. They appear somewhat more heat tolerant and some think they are less bitter than non-Asian eggplant.

Shisito pepper (Capsicum annuum) – A desired old Japanese variety which produces 3-inch long, slightly wrinkled fruit that are perfect for making tempura and other traditional recipes. Fruit is emerald green, mildly flavored with a bit of spice. Terry says it is the standard with many chefs.

Shiso Perilla (Perilla frutescens) – Shiso is another Whitwam winner. Varieties include red, green, ruffled and non-ruffled. A relative of mint, this herb is rich in calcium and iron, and its leaves are used for seasoning, coloring, pickling and garnishing. Seeds are used in dishes in Nepal, India and Korea. Their taste is complex and some have said they get notes of cinnamon, anise, mint, basil and cilantro.

Sooyow Nishiki Cucumber (Cucumis sativus) – Cucumbers may be one of the most difficult vegetables to grow in Florida. Whitwam promotes this variety which grows well in the heat. The skin is hunter green with ridges and fine white spines that are easily removed by washing. The fruit has sweet and very crisp flesh and does not need to be peeled. The vine produces both male and female flowers.

To learn more about homesteading and growing Asian vegetables, check out my newest book: 99½ Homesteading Poems