Stunning, juicy, and wickedly thorny. These fruits have a little fight in them, but offer very delicious berries. I happen to love plants that have evolved to protect their wonderful fruits. I have been growing both for a few years now and paradoxically showcase them in the only garden that was here when I purchased the property. Both prickly fruits with their long threating thorns grow in my amicable children’s garden, complete with picket fence.

When fully ripe, naranjilla produces round, bright-orange fruits and hence acquired its Spanish name, meaning “little orange.” A unique fruit from the Andes the flavor is a mix of sweet and sour orange. In 1760, J. de Santa Gertrudis Siera, a Franciscan Spanish monk who was sent on a missionary trip to South America called the fruit “Nectar of the gods” and “the most delicious that I have tasted in the world.” I don’t know if I agree, but it does taste pleasant.

This plant takes at least six months to bear and is quite attractive as a potted plant. There is a thornless variety, which I was not aware of until I had six weaponized plants growing around my children’s garden. The thornless variety would be great on a porch. The variety with thorns would not. My plants which are perennials in Tampa, are grown in partial sun and reach about 6 feet. My friend in Lutz had one plant grow under a large oak tree which reached a towering height. Her success, she says is due to all the fresh rabbit manure. She slashed the plant back, which caused it to branch out, grow more fruit and produce large golf ball sized fruits. 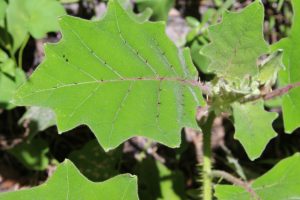 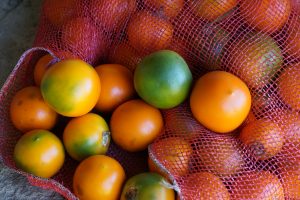 In February of 1948, 20 naranjilla plants were set out in a field at the University of Florida’s Agricultural Research and Education Center in Homestead, Florida. They flourished and were beginning to fruit when nearly all were destroyed by a hurricane. They tried in other years, but experienced nematode problems, and focused on the more popular citrus.

The plant, as my friend discovered, does best in a rich, organic soil but also can tolerate poor, stony ground. Good drainage is essential. They require a long warm wet season to thrive. Once producing flowers, the plant will be loaded with nightshade blossoms followed by small green fruits which mature to orange fuzzy ping pong balls. On the commercial level workers remove the hairs by rubbing the fruit on dry grass. For eating out-of-hand, the fruits are fully ripe when the calyx naturally separates from the fruit, leaving a circular depression. Although everbearing in the Andes, the naranjilla fruits mainly in the winter in Florida. The naranjilla can be propagated by air-layering or by cuttings of mature wood.

In addition to juice, jelly and marmalade are other options. Sherbet can be made by mixing naranjilla juice with corn syrup, sugar, water, and a little lime juice, partially freezing, then beating to a froth and freezing. It can also be juiced and added to ice cream mix, made into sauces for native dishes, or in pies and other cooked desserts.

When it comes to growing my own food, I like the motto flourish or fade. If the plants need pampering I might not be the best home. I, like you, want to grow the most food and flowers, with the least amount of time.

Although it was in cultivation in Europe since the 1700s, this plant has been an ornamental curiosity in American gardens since the 19th century. Valued for its function and appearance over its novel-taste. Litchi tomatoes have dark red cherry-size berries, with the distinctive flavor of sour cherries and a hint of tomato. Also known as fire and ice plant, the fruits can be used in a wide variety of culinary creations including; fruit tarts, preserves, jams, sauces, sorbets and wine. The best part is that it’s easy to grow, can be used as a barrier and is frost resistant.

The flavor is tart and refreshing, like a sour cherry, with the fruit forming inside a husk like a tomatillo or ground-cherry. When the fruit ripens, the husk bursts open. The fruit is ready to eat when it can be removed easily from the stem. 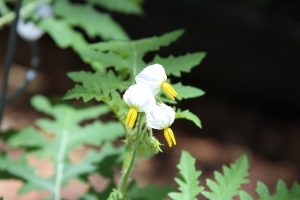 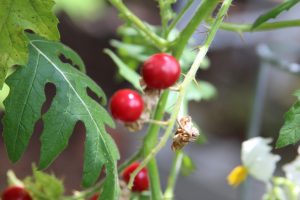 The plants are covered with small thorns, including on the underside of the leaves. A bushy indeterminate, my plants routinely grow to 5 feet. In my yard I find around five volunteer seedlings every year, which is plenty. If purchasing seeds, start plants as you would a tomato. Transplant before the prickles can put up a good fight.

To learn more about homesteading and garden grown drinks, check out my newest book: 99½ Homesteading Poems