“There is a lot of wildlife in this yard,” Gil Sanchez tells me as I enter his backyard. I initially wanted to visit his backyard after hearing him speak at a Master Gardener talk at a local library. His talk was on roses, a topic that I am not necessarily attracted to, and his interaction with wildlife, particularly birds. And I love birds! I have worked with birds, studied them in college and care for several at home.

At the end of Sanchez’s library talk he showed a video on a VHS of him hand feeding a wild adult mockingbird. The audience, as well as myself, was amazed.

Several years ago Gil had a cat named Norman that he would bring in every night. For almost a year, after calling the cat in, he would look towards the back porch light and see the silhouette of a bird peering over the doorway. Then one day Gil was calling his cat Norman and the bird showed up. 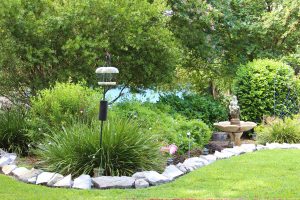 “Sometimes you train them without knowing,” Gil recalls training the female mockingbird, affectionately named Normie. With time Normie the bird, started taking treats, like live mealworms, from Gil’s hand. Over the years Normie – and Gil – have raised well over thirty broods. In the library talk he mentioned that he would take walks around the block with his wife Lindy and they would notice a mockingbird on a lamppost. The bird, who turned out to be Normie, would follow them down the street back to their house and wait for her snacks.

“Wildlife is first and plants are second in this yard,” Sanchez says. “I have been gardening since I was three years old. My grandmother would drag me out in the yard and I would water by hand.”

“I’m still doing the watering the same way when I was three years old,” Sanchez adds.

“We live in the backyard more than anywhere else,” Lindy emphasizes as she shows me camellias that date 100 years back to her mother’s house.

“We like fragrance,” she says.  “Camellias aren’t that fragrant but we try for varieties that are.”

One of my favorite attributes of the garden is the ample seating. Every twenty feet or so are a pair of chairs in the shade for optimal bird watching. 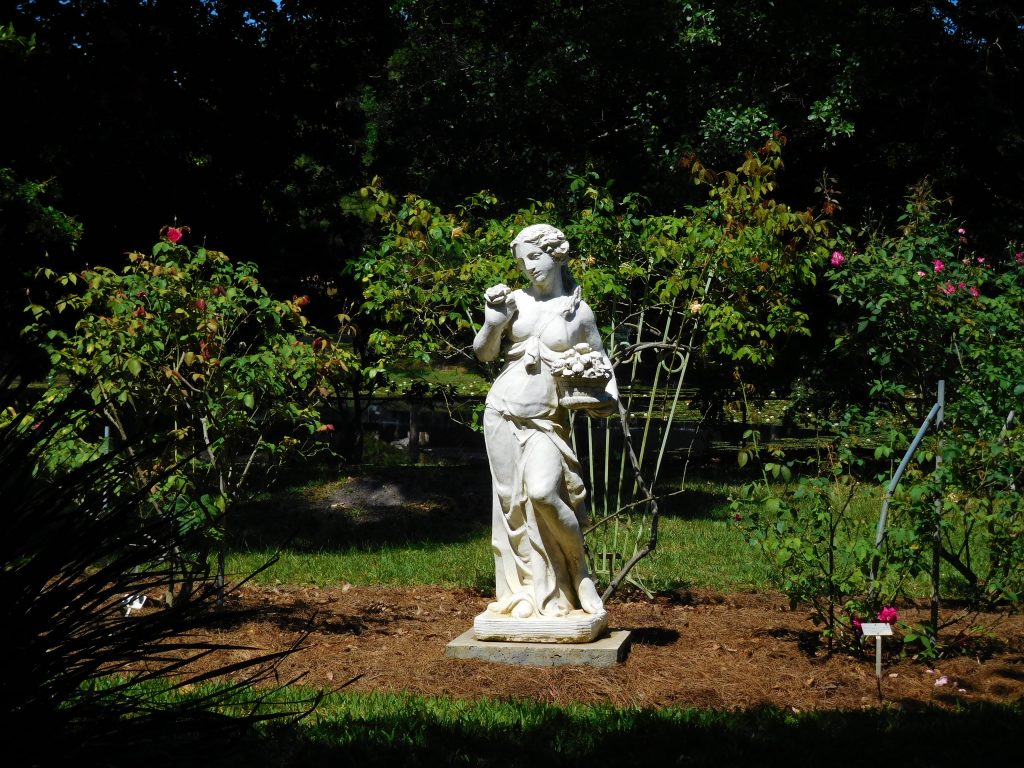 “These two suet feeders always have birds on them,” Gil says as he points to the center of the yard.
“Actually the suet feeder on the left I replaced yesterday and it is already gone. That is how much wildlife there is in the yard.”

By their fountain stands a towering purple firespike (Odontonema callistachyum) which I am told hummingbirds constantly like to visit. Gil tells me that he likes to sit in one of the many seating areas to watch them dance around the yard with a beer in hand.

The un-massacred crepe myrtles (Lagerstroemia indica) serve not only as shelter but also a food source when they go to seed, which occurs during the winter. When the leaves start coming back on the trees that is when the Sanchezes know the finches with be migrating.

In addition to trees, suet and mealworms – sunflowers are offered often. During my visit I saw almost a dozen baby cardinals learning how to navigate the skies.  The mealworms, which are kept in the refrigerator, are feed to the parent birds.

“The birds need the mealworms the most when they have a nest and young birds to feed,” Gil explains. “The mother is looking around going crazy looking for worms anywhere they can and when they see that I just threw a bunch of mealworms that makes their day.”  He also explains that you can tell where the nest is because they will get a mouth full of mealworms and take off in the same direction repeatedly to feed the babies.

In addition to a slew of songbirds their backyard is visited by mallard and Muscovy ducks, coots, clapper rails and once a bald eagle. The middle nest box in the back nest a pair of wood ducks. 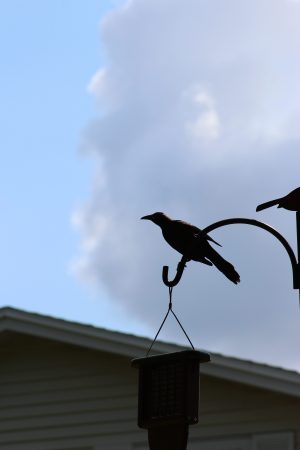 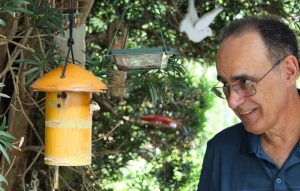 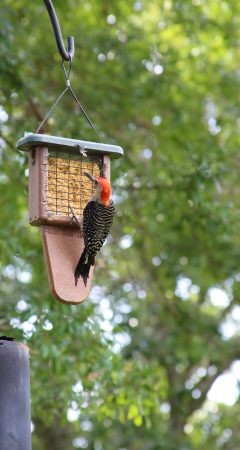 “The garden is always changing,” Lindy, who has enjoyed working in the yard for over thirty years, explains.  Currently their gardens are open with several specimen plants. Large stone pavers, leftover from interstate construction, serve as borders for the colorful blooms. “They were throwing them away,” Gild says. “I thought I could use the pieces in the garden. It took about 6 or 8 trips and they have been here for a long time.”

“This rose was from a neighbor’s house who passed away,” Gil says. The rose originally belonged to Tampa Tribune sports writer Jim Selmon. After he died, Selmon’s wife Barbara never did a thing to it.

“Everything you would say that you need to do to a rose didn’t happen,” Gil jokes. “It didn’t have sun, it didn’t have water, it didn’t have anything.” However the leaves were always in perfect shape and before Barbara died Gil took some cuttings of the rose which is likely a Don Juan variety. All the roses on their property are old garden roses.

“They grow on their own roots,” Lindy says. “You don’t need to spray them.” And that is the main reason why Gil became interested in them. He didn’t want to put chemicals in the yard with all the wildlife visiting.

“Unlike modern roses, these roses have small leaves and survive without chemicals,” Gil says.

They invite me to smell a Comte de Chambord rose which was historically used for perfume.

They show me another rose named ‘Peggy Martin’ which is a hybrid of some kind. The rose was named after the daughter of the people who tried to stay in their home during hurricane Katrina. They were down in the parishes, where the levy broke and were killed. This rose was under water for two weeks and survived.

“It’s the only rose that survived Katrina,” Gil announces. Lindy says that they have met Peggy.

“Yeah,” Gil agrees, “I talk to her every year when she says Sanchez your Heritage Rose Foundation membership is up this month.”

In addition to supporting HRF, the Sanchezes also monthly support the local wild bird food store. It was there, during a guest speaker, that Gil won cuttings of roses to start his own rose garden.

Discouraged after killing three rose cuttings using traditional methods, Gil asked around and learned of Walt Pilat’s method. Gil adjusted it slightly and has had nothing but high success.

“Out of the hundreds of roses I have rooted only a couple did not take,” Gil promisingly says.  His method involves placing one plastic pot into another. The pot that the cuttings go into should be filled with perlite. That pot goes into another which holds water but only a quarter of the way up. Drilling a few holes in a coffee container does the trick. The perlite wicks up the water to the cuttings which are tightly packed in the medium. He stresses that you don’t want the roots to form in water, just a little bit of moisture. Dabbled sun is okay for the rooting process.

When weeks are constantly in the 90’s Gil can be seen water everything by hand, sometimes multiple times a day. As he waters, he is often visited by feathered friends.

“There is a family of titmice that will line up on the crepe myrtle just above the firespike wanting me to spray water on them. I swear to God,” Gil says remarkably. “They are all looking at me, so I just hose them down and they start flapping around on the leaves. That is the funniest thing I have ever seen. Just hosing down titmice.” 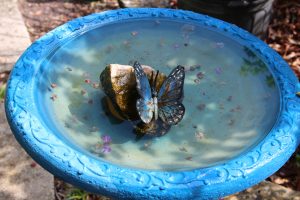 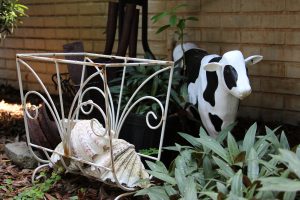 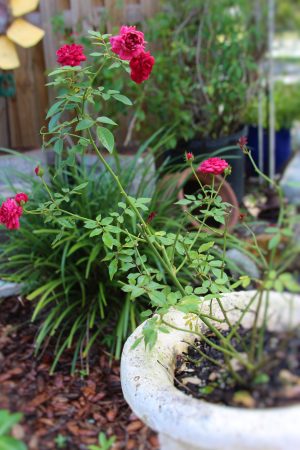 To learn more about homesteading check out my newest book: 99½ Homesteading Poems